Just Northwest of your main island The Arena awaits Players level 17 and above! 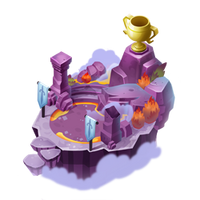 Players levels 17+ can enter The Arena and select a animal to compete against the displayed opponent. 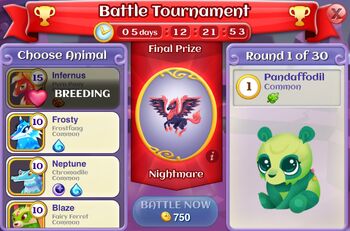 With tournaments, you'll face opponents of increasing difficulty until you go head to head with the tournament boss in the final round! Defeat the boss and win a copy of that animal. 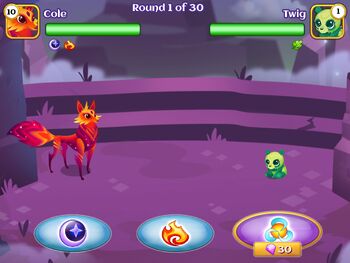 During Battle Tournaments, players can select from different attacks each turn. The battle is turn-based, meaning your opponent will only attack after you do. Every animal has one or two magic attacks corresponding to their types (each with a unique particle effect!) and the Ultimate Attack. 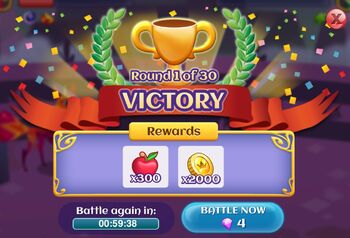 and guarantees a critical hit. This is for players who want to pay to ensure victory.

Losing a match will Exhaust your animal. While exhausted, animals cannot participate in breeding, evolving, or battling. They will still produce coins and can be fed, however. Exhausted animals will need to rest for 10 minutes before it can jump back into the fray!.

No tournament is currently active.

The previous tournament boss was the Jackalope Frost.

A list of all previous tournament bosses can be found here.

Opponents leading up to the boss vary with each different tournament release. The opponent animals for the previous tournament were as follows:


NOTE: This list is player gathered and still in progress. There may be errors!
As S8/Teamlava often make gameplay changes, type advantages may be altered from those shown in this list. We try our best to keep up with these changes!

Retrieved from "https://fantasy-forest-story.fandom.com/wiki/The_Arena?oldid=81215"
Community content is available under CC-BY-SA unless otherwise noted.