The Evolution Flower is a building available from the Market. 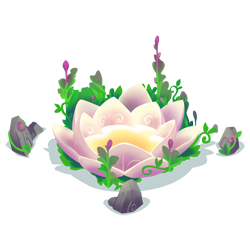 The Evolution Flower is obtainable:

Every animal has a different individual evolution time, you can view these times on each animals individual page and on the chart below.

Retrieved from "https://fantasy-forest-story.fandom.com/wiki/Evolution_Flower?oldid=61158"
Community content is available under CC-BY-SA unless otherwise noted.